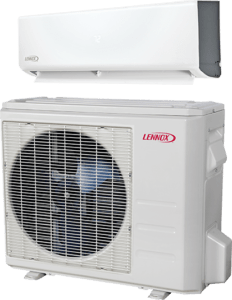 Ductless a/c’s are a great alternative when traditional central air conditioners are not an option. Homes that have electric or radiant heat most often don’t have air ducts in the walls. Installing central air in these situations can be costly as ductwork would also need to be installed throughout the home or building. However, ductless air conditioners, can be installed to cool one or more rooms at a much lower cost.

How Do Ductless Air Conditioners Work?

Ductless mini split a/c systems work similarly to a traditional central air unit. Outside there’s a compressor (condenser) and inside an air handling unit that’s responsible for distributing the cool air to one or more rooms. Multiple air handling units can be connected to one condenser, providing the option for different cooling zones, controlled by separate thermostats in different areas.

Advantages of a Mini Split System

There are several advantages of a mini split system over a traditional a/c system.

The small size of the ductless air conditioner systems make them more flexible than traditional air conditioners when adding air conditioning to a pre-existing building. Units don’t need a large space for installation, and consumers can opt for multiple thermostats/zones.

Some mini split air conditioners have the option for remote control.

In traditional ducted air conditioning systems, cool air can leak out of the system through the ductwork. Since mini split systems work without ducts, they are not susceptible to these losses, making them more efficient than traditional systems.

Mohawk Heating sells and installs Lennox Mini Split Air Conditioner systems. Our trained specialists can review your home or building and help identify a system that makes sense for you. To learn more about Lennox’s units, click here. Or, give us a call today and we’ll be happy to discuss them with you.