In most homes today, a clothing dryer is a common appliance used on a regular basis. The vent of a dryer collects debris, fluff and hair that accumulates when the clothing spins around in the machine. It should be emptied after each load, but unfortunately, not everyone makes a habit of doing so. The debris can build up over time and even clog the dryer’s vent. Our dryer vent cleaning service can help to prevent a dangerous fire from starting because of a clogged dryer vent.

Dangers of a Clogged Dryer Vent

Believe it or not, thousands of home fires each year are started due to the dryer vent. When debris begins to clog the dryer vent, the exhaust gases produced by the dryer begin to back up and create a potential fire hazard. This can turn an otherwise helpful appliance into a disaster waiting to happen. Aside from the biggest risk of a home fire, clogged dryer vents can lead to short-circuiting and major electrical problems, overheating in the home and increased energy bills as the dryer has to work harder and harder with each spin cycle in order to dry clothes.

Learn More about the fire dangers >

What Causes a Clogged Dryer Vent 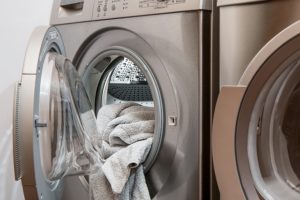 In a nutshell, the biggest cause of a clogged dryer vent is a lack of maintenance. It is impossible to escape the fact that as water evaporates in the dryer, lint with detach from the spinning clothes and become trapped in the vent. Along with emptying the smaller lint trap included with most modern dryers, homeowners need to be vigilant about checking the length of the exhaust vent on a regular basis, or approximately once each year even when no problems are apparent. Another major cause of clogged dryer vents is placing the dryer far from the exterior wall. This creates a longer vent to take hot air outside of the home, and a longer vent simply means more opportunities for a clog. Plus, a long and winding vent exhaust pipe can be crushed up against a wall when going around a corner, which leads to major blocks and potential buildup. In some cases, birds and animals can even create nests within the dryer vent, which is a major contributing factor to a big clog.

Increasing Energy Efficiency in a Dryer

One of the biggest reasons to clean a dryer vent is to increase the efficiency of the dryer itself. When a dryer’s vent is partially blocked or even fully clogged, it has to work harder than ever to remove moisture from clothes, create heat and dry the items in the spin cycle. Running a dryer for an extended period of time is a major waste of money, and it can add up quickly for a person’s monthly utility bills. In addition, the extra heat generated by the dryer with extra use and overcompensation may result in higher temperatures throughout the house, especially if the exhaust vent pipe runs through more than one room before exiting the building. A higher indoor temperature means that during the summer, the air conditioning system has to work harder as well. Dryer vent clogs can therefore lead to a waste of valuable energy resources, making them a problem for an eco-friendly home as well as additional costs for energy each month for the homeowner.

Signs That a Dryer Vent Cleaning is Needed

It is important to clean dryer vents before they get to the point where they could be a fire hazard. Some of the signs that a dryer vent cleaning is necessary include the following:

When to Call in a Professional to Clean a Dryer Vent

All of the signs listed above signify that a dryer vent absolutely needs to be cleaned. Many homeowners opt to clean their dryer vents themselves, which can be done by unplugging the dryer from the wall outlet, removing the vent exhaust pipe from the dryer, vacuuming or pulling out debris from both the dryer and pipe, visually inspecting the interior of the vent pipe and checking the exterior of the home for any blockages where the exhaust vents outside. However, this can be a time consuming process, and it is not always effective. A better idea may be to call a professional. Rather than just calling a handyman, it is worth looking for a dryer exhaust technician that is certified by the Chimney Safety Institute of America. These professionals are familiar with the biggest fire risks and can help you prevent clogs as well as eliminate any existing ones.

Dryer Vent Cleaning Near Me